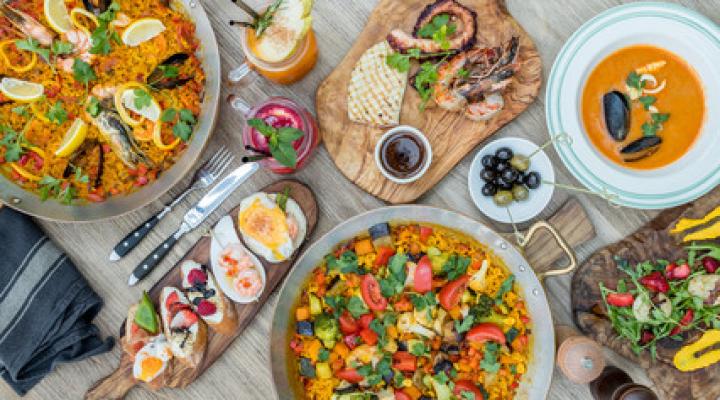 Some people choose to relocate to Spain for the year-round good weather. For others, it’s the laidback lifestyle and the friendly people that’s the main attraction. After all, there’s a reason that Spanish people have been named the most content in Europe!

But if you like hearty fresh food then we have another Spanish attraction to share with you: the cuisine.

Spanish food is some of the best in the world. It’s rich and flavoursome, making use of the incredible array of fresh ingredients that are available on your doorstep. Sea food, for example, is used liberally in Spanish cooking, and can move from the sea to your plate in mere hours.

The Spanish tend to have a liberal, broad-minded attitude to food. You’ll find no ready meals nor calorie counting here, and it shows in the quality of the food not only that you’ll find in restaurants but also that people cook in their own homes.

From tantalising tapas to rich churros, Spanish food is becoming increasingly popular around the world, and it’s easy to see why. Here’s everything you need to know about Spanish food and culture, plus ten of our favourite Spanish recipes:

When it comes to cuisine, there is huge regional variety throughout Spain This means that you will enjoy a host of different dishes as you travel around the country. Here in Andalucia we are considered to be the home of tapas: you’ll find small rich lace of locally created delights on every corner. Other popular ingredients with Andalicusin origins include: sherry, gazpacho, Spanish omelette (tortilla), migas (essentially, flour-based breadcrumbs), cured ham from Jabugo or the Alpujarras, and olive oil.

It is worth noting that in Andalucia dinner is eaten considerably later than it would traditionally be in other European countries: it is not unusual to eat anything before pm and full meals can often run beyond midnight, even on a weekday.

Spa is a country with a sensible alcohol culture: it is not usual to see people enjoying a restorative glass of wine or sherry with their breakfast and yet you will rarely see Spanish people getting drunk Because alcohol is both affordable and readily availbale in the country (with no licensing hour restrictions) there is no real binge drinking culture, or a desire to drink quickly in a relatively short period of time.

Do you have a passion for food? Ready to try your hand at a Spanish recipe or two? Here are ten of our favourite simple Spanish dishes that you can cook at home:

Rich tomatoes and punchy garlic dominate this vitamin C-rich recipe that really packs a flavourful punch. Gazpacho is a thick and smooth Spanish soup that is served chilled: perfect for a hot, sunny day. No cooking, or lengthy preparation required!

Place all of the ingredients in a blender and pulse until completely smooth. You should also do this with a stick blender.

Season with salt and pepper to taste.

Hearty chunks of fried potato are served with spicy tomato sauce to create this classic tapas dish that is impossible to dish. Because patatas bravas recipes varies so much around the country, you can add or remove ingredients to suit your tastes.

Heat half of the oil in a pan and fry the diced onion for about 5 mins until softened.

Bring the pan to the boil, stirring to ensure no ingredients stick to the pan, waiting until the ingredients are soft and pulpy.

Toss the cubed potatoes in oil and place them in a baking tray, before placing in the oven for 45-50 minutes.

Remove the cooked potatoes and place in a serve dish, before generously spooning the cooked sauce on top. Serve immediately.

Fry the onions in the olive oil, cooking them until they are sweaty and translucent. Add the potatoes and cook for between 25-35 minutes, until the potatoes are soft and ready to eat. Stir regularly so that they don’t brown.

Whisk the eggs in a bowl, and then add the potato mixture.

Heat a frying pan then add the contents of the bowl to the pan. Cook until the eggs set and the edge of the tortilla starts to brown. At this point, flip the tortilla over using a plate, so that the uncooked side is also cooked.  Remove from the heat, then allow the tortilla to rest and cool for around 15 minutes before serving.

Creamy on the inside and crispy on the outside, there is nothing finer than a Spanish croquette. These can be filled with almost anything you please but are best cooked simply, and filled with traditional Iberian ham.

Melt the butter in a medium sized saucepan and gently fry the onion until they become translucent. Stir in half of the flour and then add the milk slowly, stirring constantly. Once all the milk is added, stir in the ham, cheese, mustard and cream. Cook for 1 min more until the cheese is fully melted.

Pour into a bowl and cover the surface with cling film to stop a skin forming. Leave to cool, then chill for 4 hrs or overnight - the mixture needs to be very stiff for the recipe to work, and to hold its shape properly. Once the mixture is set, take heaped teaspoons of the mixture and, with wet hands, roll into 24 small oval shapes and put on a tray.

Beat the eggs in a shallow bowl, put the flour on a plate and half of the breadcrumbs in a bowl. Take each croquette and dip it into the flour, then the eggs, then the breadcrumbs, until they are fully coated.

Fill a large saucepan with sunflower oil and when it is hot, add the croquettes 2-3 at a time. When they are golden brown remove, continuing the process until all of the croquettes are cooked and ready to eat.

Is there any food more traditionally Spanish than a simple Chorizo? This recipe takes the Chorizo and infuses it with extra flavour.

Slice the chorizo into chunky discs and fry in hot oil over a medium heat. When the chorizo starts to brown, add the cider and the bay leaves. Lower the heat and leave to simmer for an additional 6-7 minutes. Garnish with parsely and serve immediately.

This Spanish version of Ratatouille is as chunky and rustic as its French cousin, and well worthy of exploration. This makes a great side dish to go with many of the other meat-focused tapas recipes on this list.

Sautee the onions until they sweat and turn transparent, but are not browned. Add the other vegetables to the pan, allowing them to cook and their flavours to blend.

In a separate pan, cook the tomatoes until they create a smooth tomato sauce. Add the garlic, and other herbs to the tomatoes. Combine the two pans and cook on a medium heat for an additional 5 minutes, allowing the flavours to blend.

Fry two eggs to taste, and serve the vegetable Piso with a fried egg on top.

Is it possible to visit Spain without enjoying a glass of Sangria or two? We’re not sure that it is! This classic and fruity Spanish wine cocktail pairs perfectly with Spanish cuisine of any kind!

Dissolve the sugar over a flame with 2 tablespoons of water to make a sugar syrup. Add the juice of your oranges and lemons to this syrup, saving the rind for later. In a bowl stir the wine with the syrup and juice mixture: add slices of the left over rind and the cinnamon stick.

Let this sit to infuse for a couple of hours before serving: for a modern twist, top off with lemonade or carbonates water to add a lighter, bubblier texture.

The fresher your Gambas, the better this recipe will be! If you can secure your fish straight from the ocean then this simple yet tasty dish will fast become a firm favourite: it’s classic in its Spanish simplicity.

Completely cover the bottle of a pan with olive oil and then heat. Add the garlic to the oil and when it starts to sizzle, add the shrimp. Leave for a moment before adding the sherry and the salt. Simmer for a minute until the shrimp are cooked through and served: it really is that easy!

Perfect for serving with succulent roast chicken or fish, Salsa verde is a wonderful way to inject fresh Spanish flavours into all of your favourite dishes. And the good news is, it’s incredibly easy to make at home too!

Chop the herbs and garlic until as fine as possible, then add the mustard and the capers. Mix these in a bowl until the ingredients are all blended. Stir in the olive oil and the vinegar, and you’re ready to serve.

Finally, we add a simple and healthy dish that is almost always on the table for any Spanish meal: a simple mixed salad. Easy to prepare, tasty, and attractive to look at, Spanish salads are always a treat!

Quarter the tomatoes, peel and slice the cucumber and dice the lettuce. Toss these ingredients together to form the base of your dish. Finely slice the onion and grace the carrot, adding these to your salad mixture. Finally add the drained tuna and the asparagus, gently tossing the ingredients together, before garnishing with the olives to serve.

Ready to cook some Spanish recipes from a new home in Spain, rather than daydreaming about the Med in the rain? Why not get in touch with our property experts today: they’d love to help you turn your Spanish dream into a reality.