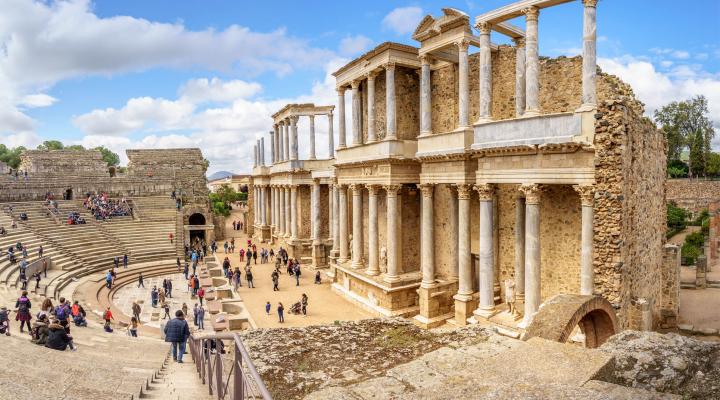 Whilst many visitors travel to Spain for the sun, the sangria, and the incredible beaches, Spain is actually a country with a rich cultural heritage and one that has a lot to offer to those travellers looking to broaden their minds and explore the history of the country they’re visiting. There are an incredible 44 properties in Spain on the World Heritage List, ranging from churches and monasteries, to sites of archeological interest.

From the creations by Gaudi in Barcelona to the beauty of the Alhambra , most frequent visitors to Spain have already seen the most popular of these heritage sites. But if you’re looking to go off the beaten track and enjoy something new, here are ten of the best UNESCO World Heritage Sites in Spain that you probably haven’t visited yet:

The archaeological ensemble of Merida, located in Badajoz province in Extremadura, has been a UNESCO site since 1993 and is comprised of several examples of Roman architecture that have all been incredible well preserved. The Roman architecture of Merida is all in the open-air, and there is so much to see that it will take two full days to explore it all. A general ticket costs 12 euros per adult, and gives access to six monuments in total: these are the theatre, circus, amphitheater and other large architectural sites. Elsewhere in the city you will find several fine examples of Roman aquaducts, as well as the Roman bridge which passes over the River Guadiana. Be sure to take the time to visit the National Roman Art Museum, which is also located here.

2. Heritage and mercury, Almadén
One of the newest UNESCO sites on this list, the mining sites of Almaden and Idirija (in Slovenia) formed a single UNESCO site in 2012. These locations are significant because, when viewed a singular entity, they were the largest mercury mines in the world. The mine at Almaden has been in existence since the 16th Century, and since that time much of the mercury mined in this site was shipped to Spanish America. If you choose to visit, you will be able to take a tour 50meters underground to see where the mercury was extracted, as well as visiting the Retamar Castle and San Rafael Royal Miners Hospital: the latter is the site of a wealth of historical archives about mining in the area.

First minted as a UNESCO Heritage site in 1986, the Mudejar architecture of Aragon is located in the provinces of Teruel and Zaragoza. Whilst Aragon isn’t a region that is visited by tourists as often as some of Spain’s more popular attractions, it is wrong to overlook this incredible location. What makes this site so unique is that the art here blends Christian and Moorish influences, as the two groups cohabited here peacefully for centuries. The site itself comprises of ten religious and secular monuments from both Christian, Muslim and Jewish heritage. The most famous of these are the church tower and church of San Pedro de Teruel, the Mudejar features of the Aljafería Palace of Zaragoza, and the parish church of San Pablo de Zaragoza.

Las Medulas became a UNESCO World Heritage site in 1997 thanks to its impressive array of Roman artefacts. Though the Community of Castile-Leon, where the site is located, was one of the last Spanish areas to be conquered by the Romans, their legacy continues to live on. Here you will find artefacts in excellent condition which, when contrasted with the lush and verdant green of the surrounding countryside, is a visual feast (and a great sight for photographers).

The Palmeral of Elche has only been a UNESCO site for 20 years, having first been given UNESCO status in 2000. You can find this site in Alicante, Valencia. What makes this site so special is that it displays North African agriculture where you simply wouldn’t expect it! In the Eighth Century, a palm grove was created in the city: something you will find nowhere else in Spain, or in Europe. It’s a beautiful site to behold, and incredible to consider that some of the date palms here are original, as is much of the functioning irrigation system.

6. Royal monastery of Santa María de Guadalupe
Located in Extremadura, the Royal monastery of Santa Maria de Guadalupe is an ancient building that first became a UNESCO site in 1993. The earliest version of the monastery was first constructed in the 12th century, when a shepherd found a statue of the Virgin Guadalupe on the site, and so built a chapel in her honour. For this reason, the town has long been an important location for pilgrimage, and therefore has grown considerably over the years. Now you will find a large and impressive monastery with beautiful cloisters and paintings by famed Italian artist Luca Giordano.

Located in the heart of Andalusia, and officially listed as a UNESCO World Heritage site in 2003, the Renaissance monumental ensembles in the cities of Ubeda and Baeza are beautiful examples of 16th centrury renaissance architecture. In Ubeda the  Palace of Francisco de los Cobos, la Cárcel del Obispo (Bishop’s Prison, which is now a law court) and the Palace of the Dean Ortega are significant and well worth exploration. Meanwhile in Baeza the most significant and important Renaissance buildings are the cathedral, the fountain of Santa María, the former Seminary of St Philip Neri and the University building. Be sure to allow plenty of time to visit both cities, as they are both exceptionally important, and beautiful, sites.

Since 1998 Madrid has boasted a UNESCO site just a 35 minute drive outside of the city centre, in Alcala de Henares. Built in the 16th century, this city is the first planned university city in the world, constructed with the intention of becoming a model for other universities. Cervantes, famous for his Don Quixote, was born here and the University boasts incredible examples of architecture that are well worth exploration if you’re spending any time in or around Madrid.

Are you thinking of moving to Spain? Whether you want to make a permanent leap, or are looking for the perfect holiday bolt hole, our locally based property experts are perfectly placed to help you find the home of your dreams. Why not get in touch today to see how we can help you.