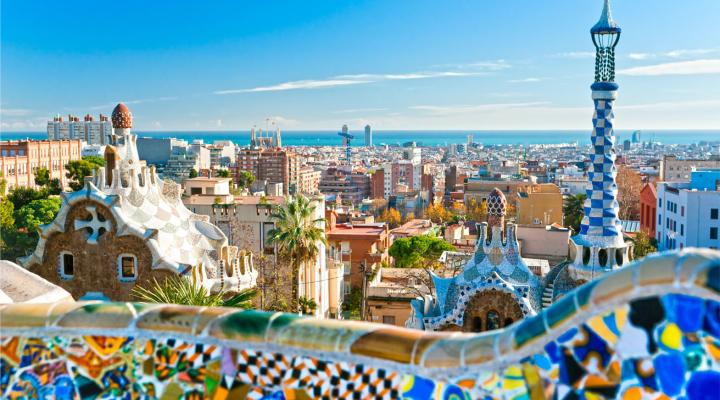 Antoni Gaudi was a proud Catalan man, and one of Barcelona’s most famous and flamboyant architects: In fact, Barcelona as we know it would not exist were it not for the incredible works of Antoni Gaudi. The fairytale architecture of Gaudi has many magical, whimsical qualities. It would be impossible to find works like these anywhere else in the world and the works of Gaudi alone mean that Barcelona is a city that should be on your ‘must visit’ list. But, in order to better understand his works, one needs to better understand the man himself:

Getting to Grips with the Life of Gaudi

Gaudi’s life was as fascinating and as full of contradiction as the works he created. Gaudi was plagued by poor health for most of his life, and turned to vegetarianism to help control the symptoms of his rheumatism, under the recommendation of German priest and natural medicine practitioner Dr. Kneipp. Unfortunately, his strict vegetarian diet meant he often imbibed just lettuce leaves sprinkled with olive oil and some nuts, which often led to more serious bouts of illness.

His Lifestyle Led to His Death

In the few photos you may have seen of Gaudi, he is the dapper and well-dressed gentleman of his youth. Gaudi was well-presented, and favoured expensive suits during his early years, but as time passed this changed. A combination of the deaths of loved ones to economic hard times to work troubles turned Gaudi into a frugal semi-recluse who seriously neglected his physical appearance. It was his shabby appearance that ultimately led to his death: He was struck by a tram but, because he was mistaken for a beggar, he didn’t receive much medical attention. The following day the Chaplain of the Sagrada Familia recognised him, and his medical care was considerably increased, but at that point it was too late. He passed away three days later.

Like so many Catalans of today, Gaudi was a proud Catalonian and fought for Catalonian independence. He was heavily involved in protests for his cause, and once even spent a couple of days in jail. But his passion for politics was not stronger than his passion for architecture: despite the fact that, when at school, he wasn’t considered to be very good at it! In fact he barely passed his exams, scrapping the bottom of the barrel so extensively that Elies Rogent, the then Director of Barcelona Architecture School (BAS), stated that: “We have given this academic title either to a fool or a genius. Time will show.”

His Reputation Amongst His Peers

And did time show? Well, Gaudi’s success speaks for itself! But it is also work noting that amongst his famous Spanish peers, Dali was a huge fan of Gaudi whilst Picasso hated his work. Dali and Gaudi had shared artistic temperaments, both disobeying the traditional rules of realism and shying away from the straight line. Dali once said of Gaudi’s work: ‘Those who have not tasted his superbly creative bad taste are traitors.’ Picasso, meanwhile, was much less enthusiastic about Gaudi’s work, which he struggled to find merit in. In fact, he once bade both Gaudí and the Sagrada Família to hell.

It may help you to better-understand Gaudi’s more religious works to know that Gaudi was a long-term bachelor who never married, and that his strong faith in Catholicism, which is such a big influence in many of his works, means that he is currently being considered for Sainthood. Apt, considering that his nickname throughout Spain has always been ‘God’s architect’.

Gaudi and His Most Famous Works

Gaudi’s works, and his influence, is everywhere you turn when you’re in Barcelona. From his earliest job designing unique lamp posts for the city to his greatest gift of the Sagrada Familia, Gaudi’s touch is all over the city. When you’re visiting Barcelona, here are some of the most famous Gaudi works that you should look out for:

One of Gaudi’s earlier works, the Bodegas Guell is a winery that served as an impactful introduction to his unusual use of shapes and lines. Although the building has modernist influences, even as he was starting his career, Gaudi’s work could not be restricted to just one style. Bodegas Guell is the earliest evidence that Gaudi’s non-traditional approach to architecture and blending different styles was going to be a success. If you’re a true fan of Gaudi’s work and would like to explore every aspect of his cannon, then a visit to Bodegas Guell is a must.

Casa Vicens is the first home that Gaudi ever designed. Built between 1883 and 1885 as a summer house for the Vicens family, where he showcased his unparalleled talent. It is the unique, assymetrical features of the building that really make it stand out as one of Gaudi’s works. The home has been restored, as much as possible, to its original state, highlighting its importance as one of the first buildings to kick off the Modernism movement in both Catalonia and wider Europe. The building now has a new purpose as a museum and cultural space, and just like so many of Gaudi’s other constructions, it attracts thousands of visitors every year.

The Casa Batllo was redesigned by Gaudi between 1904 and 1906. Gaudi remodeled an existing home by adding a distinctive façade in his own style. The roof of the building is dragon scaled whilst the unusual balconies are mottled. The Casa Batllo is the kind of building that attracts attention, that keeps you looking thanks, in part, to the fact that its colour seems to change in the different lights of the day. It is in this building that Gaudi’s holistic approach to architecture becomes most apparent. 1 million visitors a year now visit the Casa Batllo in order to appreciate this great work.

If you visit the Park Guell in the heart of the city then make time to stop and appreciate the famous reptile figure that Gaudi created here. This work showcases both Gaudi’s artistic temperament as well as his use of colour. Although the project of redesigning a park was huge, it is the attention to detail that Gaudi showed with these smaller details that really set his work apart. Quirky, modernist, attention-grabbing, playful and fun: this is a design detail that truly did showcase all of the hallmarks of Gaudi’s work.

Of course, it would be impossible to talk about the work of Gaudi without mentioning the epic and ongoing construction of the Sagrada Família. This modernist masterpiece is considered to be Gaudi’s magnum opus, and it is one of the most visited tourist attractions in Barcelona. No trip to the city would be complete without a visit to the Sagrada Familia. It’s important to remember that, despite having been consecrated by Pope Benedict XVI in 2010, construction of the cathedral is not slated to be complete until 2027. This means that when you visit you’ll have to ignore the drilling, cranes, and other general construction noises. But this doesn’t and shouldn’t detract from the breathtaking beauty of the building.

Art critic Rainer Zerbst once said of the Sagrada Familia that ‘it is probably impossible to find a church building anything like it in the entire history of art’ and although its design divides local residents in Barcelona, many of whom simply hate it, it is truly unique. To truly appreciate the cathedral, it’s important to spend just as much time inside the building as you do outside it. The three facades are replete with ornate sculptures, inscriptions, symbols and engravings: stunning symbolism is everywhere you look. Much of the design is inspired by nature: Gaudí studied animals, plants and even the stars to understand their geometry and function. You will see the natural world everywhere you look. Although the Sagrada familia is a functioning Roman Catholic basilica, it is unlike any other you will ever visit.

On the outskirts of Barcelona, you will find the Gaudi Museum, which is a wonderful place to learn more about the architect. The building itself was the architect's residence from 1906 until 1925, although it was designed by his assistant. The building was built as a sample house of the park güell urbanization project, but sadly the project was not a success. With hindsight, this is good news for fans of the architect, as from 1963 the house we converted and then opened to the public as the Gaudí House Museum.

Whilst, architecturally, the museum may not be the largest or grandest structure, the museum is worthy of exploration because it shows Gaudi on a more human level. The museum shows furniture that he himself had designed and also displays objects and documents relating to his life. The most private and personal rooms in the house have been recreated, and it is here that you will better understand the religious and private man that Gaudi truly was.

Are you thinking of moving to Spain? Whether you want to make a permanent leap, or are looking for the perfect holiday bolt hole, our locally based property experts are perfectly placed to help you find the home of your dreams. Why not get in touch today to see how we can help you.