Twenty of the Best Malaga Attractions 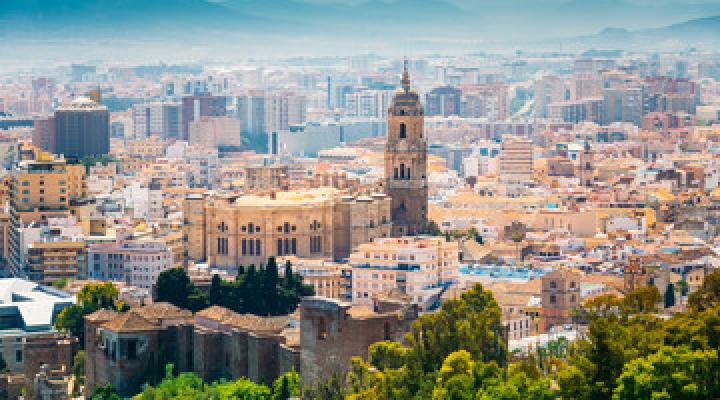 Malaga is most well known for being the birthplace of Picasso and for its beautiful surrounding beaches. But what you may not know is that Malaga also offers a plethora of world class cultural attractions, as well as some of Southern Spain’s finest bars and restaurants. So where should you start?

Don’t visit Malaga until you’ve read our list of the twenty best Malaga attractions for both local residents and tourists:

Alcazaba is a fortress that was constructed by the Moorish leaders of Spain in the middle of the 8th century. Whilst the interiors might be particularly grand, Alcazaba is an outstanding example of incredibly preserved Moorish architecture. The fortress dominates the skyline above Malaga and offers incredibly views both over the sea and of the city. What’s more, it offers an ornate maze of secret courtyards and battlements, making it an exciting family attraction not to be missed.

Alcazaba isn’t the only castle in Malaga! Gibralfaro Castle is another impressive hilltop castle. This one was built in the 10th century by the Caliph of Cordoba and then further enlarged in the 14th century. Visitors are able to both explore inside the castle and walk the length of its turrets. Just like Alcazaba, Gibralfaro Castle affords incredible views of both the sea and the surrounding countryside. Gibralfaro was once considered the most impregnable fortress in mainland Spain, making it an incredible attraction well worth exploration.

No visit to Malaga would be complete without a visit to its world-renowned Picasso Museum. Pablo Picasso was born and spend his early years in Malaga, and he is often referred to as the city’s most famous son. This stunning museum houses over 200 of the great man’s works, and was opened by his daughter-in-law and grandson, who donated many of the pieces in the gallery. The museum’s collection is so extensive that you can spend a full day apppreciating it, but you can also take in the key pieces in just an hour or two if your time in Malaga is tight.

After a morning in the Picasso Museum, why not head over to the nearby El Pimpi restaurant? This is one of the oldest and most famous restaurants in Malaga, and is beloved by both tourists and locals alike. The menu is traditionally Spanish, and there is also a small tapas bar attached where you can enjoy a glass of wine and a snack or two, no matter what the time of day!

Malaga’s Cathedral is widely recognised as one of the city's most important architectural attractions. Nicknamed “The one-armed woman” thanks to its uncompleted second tower, which lends it a lopsided appearance, the cathedral was built between 1528 and 1782. The cathedral combines both Renaissance and Baroque-styles, and its unusual structure adds to its charms rather than detracts from them. No visit to Malaga would be complete without a visit to the city’s infamous cathedral.

There are very few Roman attractions remaining in Spain, which is what makes the Roman Theatre in Malaga so important. It is located at the foot of the Alcazaba fortress, which means that you can visit both attractions in the same day, and just like the fortress, it is surprisingly well preserved given its age, thanks to a lengthy restoration that was completed in 2011. Now as well as visiting the Roman theatre, it is also possible to enjoy a concert or play here.

Malaga Port is a busy, bustling port that welcomes thousands of visitors every year. From small fishing boats to huge cruise liners carrying thousands of passengers, you’ll see a wide array of different vessels here. As well as ship spotting, the port area is a vibrant destination for shopping and spending time in the many bars and restaurants that line the promenade. It’s an updated attraction that’s not to be missed.

Located in the suburbs of the city, Malaga’s Botanical gardens are a beautiful destination to spend the day out of the city and get closer to nature. The gardens were first established in the mid-19th century and contain an incredible array of flora and fauna from all over the world. As well as smaller flowers, the gardens also feature a 400 year old olive tree, and an incredibly collection of palm trees, leaving visitors feeling that they have wandered into a tropical paradise.

What would a visit to Spain be without nodding to the country’s iconic bullfighting culture? Malaga’s bullring is an attractive attraction that was first constructed in the 19th century. It is considered to be one of the most important bullrings in Andalucia, and during Easter and August it is possible to watch traditional bullfighting here. The rest of the year you can tour the bullring, and imagine the excitement and the roar from the crowd.

Soho might not seem an obvious choice for a day of sightseeing in Malaga. The streets in this once-popular residential area are now run down and neglected. But thanks to an urban investment scheme designed to refresh the unloved area, Soho is now home to some of the best and most innovative street art in Andalucia. Some of the world’s leading grafitti artists have adorned Soho’s neglected buildings with amazing spray-paint images, and the best part is, a trip to hunt out this art work is completely free.

Can’t think of anything worse than being stuck in the city during the height of the summer? Then you’re in luck, because Malaga is a city that has a rare secret: its own beach! La Malagueta beach is just a ten minute walk away from Malaga’s port and offers a 0.6 mile stretch of man made sand beach with the opportunity for a refreshing swim in the sea too. It’s the perfect place to be on a hot day!

Plaza de la Merced is one of the oldest traditional squares in Malaga. It is also the square on which Pablo Picasso was born, adding to its historical importance. Now? It’s just a great place to hang out! With bars, restaurants and relaxing sun terraces on all sides, Plaza de la Merced is a great place to meet friends for a drink and a meal, either for a long lunch or an exciting evening. The surrounding La Merced neighbourhood is the place to be in the evenings, with plenty of bars and clubs to keep you entertained all night long.

Situated on the Plaza de la Merced, La Tranca is one of the hottest bar spots in Malaga, and yet its customer base is made up almost entirely of locals. This is testament to both the quality of the wine and tapas, as well as the warmth of the welcome that La Tranca offers. The bar has a light and airy, but very authentic feel, and is the perfect place to visit if you want to experience a traditional Spanish bar experience, just like a local.

If you love Spanish food, then there’s no better place in Malaga to stop for a drink and a snack (or two) that the city’s Mercado de la Merced food market. Featuring 22 food stalls serving local, freshly made produce, the market was reopened in 2015 following lengthy restoration, meaning that it has a new and modern feel. As its situated just a five minute walk away from Malaga’s Old Town, the market is the perfect place to take a break from a busy day of sightseeing, and the quality of the produce won’t disappoint.

In a city that is full of high-quality restaurants, you would have to offer something special or unusual to make this list, but luckily for Vino Mio, they do both. Serving an exotic menu that features both crocodile and kangaroo, a meal here is a culinary delight. What’s more, the restaurant hosts regular Flamenco shows, meaning that you will be entertained as you dine. This is a quirky restaurant that you won’t forget, for all the right reasons.

If you’re looking for the freshest fish in Malaga, then the Mercado del Carmen is the best place to go. This long standing fish market is located in the El Perchel neighbourhood, which is worthy of exploration in its own right. With the ocean right on its doorstep, you can see the fish being pulled in every morning, and then have it on your plate by lunchtime. The market is surrounded by restaurants and tapas bars, so if you don’t want to cook for yourself, you’ll find a host of experts happy to do it for you!

If you’re not a fan of shopping then Malaga’s most famous market, the Mercado Atarazanas, is still worthy of exploration, thanks to its beautiful stained glass windows and oversized archway, which was originally constructed in the 14th century. It’s a beautiful and bustling destination that is full of locals and feels like the commercial heart of the city, whilst harking back to a bygone age.

When it comes to choosing a bar in Malaga, you really are spoilt for choice, but one of the best has to be Bar Los Gatos. Offering a traditional décor and an extensive menu of both drinks and tapas, what makes Los Gatos so unique is that is manages to walk a delicate tightrope and appeal to both locals and tourists at the same time. This is no doubt thanks to the warmth of the welcome offered by the staff, both in Spanish and in English, and the convenient location close to many of the city’s finest museums and monuments. There’s nowhere better to stop for a break from a busy day!

Although the cathedral is the most famous church in Malaga, the Basílica Nuestra Señora de la Victoria is just as important and significant. stands on the site where the Catholic Monarchs pitched a siege of Málaga during the Reconquest, and houses an incredibly extensive collection of art and sculptures that are well worth exploration.

20. Museum of Arts and Customs

Finally, the Museum of Arts and Customs is a fascinating museum situated in the Old Town of the city, and housed in a typically Moorish building that was constructed in the 17th century. The museum offers a fascinating insight into the traditional customs and handicrafts of the local people, leaving visitors with a greater appreciation of all that is wonderful about Malaga.

Are you thinking of investing in property in Malaga? Always dreamt of having a Spanish bolt hole of your own? Then why not get in touch with our local property experts, who are perfectly placed to help you turn your dream of Spanish home ownership into a reality.