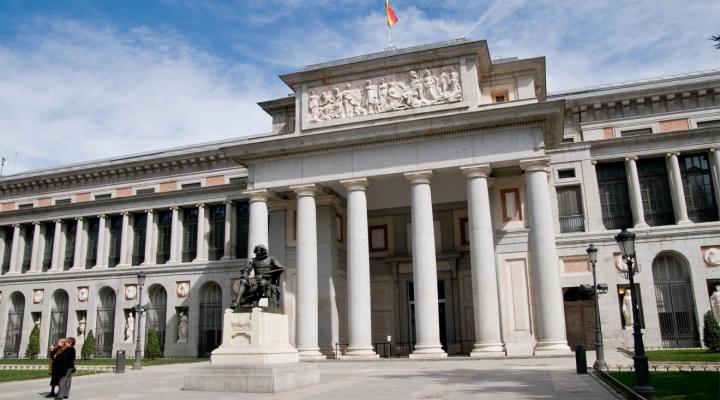 If you’re spending any time in Madrid, then you can’t miss the opportunity to visit the city’s El Museo del Prado. Located in the centre of Madrid, El Museo del Prado is the largest and most important art gallery in Spain. It is also one of the finest art galleries in Europe, boasting an incredible collection of European art. Here you will find works from some of the region’s masters, including Goya, Velázquez, El Greco, Rubens, Titan and Bosch.

Entrance to the museum is affordable with general admission costing just 15 euros per person. Entry is half price for children. But if you’re on a tight budget then it’s worth noting that the museum also offers free entry for two hours every day. Between Monday and Saturday, you can enter the museum without charge between 6pm and 8pm. On Sunday the hours of free entry are between 5pm and 7pm.

There are more than 8000 paintings, and more than 700 sculptures currently houses in the Prado museum. Because of the sheer size and scale of the gallery, it can feel overwhelming to go in without a plan. What paintings are the gallery’s must-sees? To help you make the most of your visit, we have compiled a list of just some of the most important works currently being housed in Madrid’s Prado museum:

The Garden of Earthly Delights is simultaneously on of the most interesting and most well-known pieces housed within the Prado museum. It is a fascinating and incredibly detailed pieces that you could ponder for hours and still find something new to look at. It depicts the theme of sin over three scenes, reflecting on historical enjoyment of sinful pleasure.

Scholars have been arguing for centuries about the meaning of Velazquez’s masterpiece which features the Infanta Margarita and her ladies in waiting. Considered one of the artist’s most important and significant works, almost all art historians have analysed this piece at some time of another.

Are the women in the picture being reflected in a mirror? Has someone important (perhaps the king or queen) entered the room without the women noticing? If you’re going to visit the Prado museum then you shouldn’t miss the opportunity to join some of the greatest minds in history in pondering the meaning behind this piece.

An opportunity to view a piece by Rubens should never be passed up, and his painting of the Three Graces is as important as it is beautiful. Surrounded by floral arrangements in a pastoral setting, the three graces are considered to be symbols of love, beauty, fertility and female sexuality. It is thought that the feelings of love and happiness invoked by the piece were inspired by the happiness that Rubens himself was feeling, as the work was created during the happy years of his second marriage.

Titan, Danaë and the Shower of Gold

This is not the only significant Titan piece housed in the Prado. Another piece entitled Emperor Charles V at Muhlberg is a more traditional portrait which was created to commemorate Charles V’s victory over the Schalmalkaldic League at Mühlberg on April 24th 1547. Created as a piece of political propaganda, the piece was created in a traditional style and poses many contrasts to other Titan pieces.

Goya’s black painting are a sombre, harrowing and somewhat terrifying collection of paintings created almost exclusively in black. You will find these on the ground floor of the Prado, and the piece that perhaps stands out the most from this collection is that of Saturn. It depicts Saturn devouring one of his own sons, and the expression of anguish and loss that radiates from the canvas is truly haunting.

You will find a huge collection of paintings by Goya situated throughout the museum. As the Master Chamber Painter for the French Royal Family, he painted portraits prolifically, and used his skill to capture the personalities of each subject in their faces. He also created propaganda-inspired pieces for the Napoleonic war, which can also be seen in the museum, and which demonstrate the breath and depth of his skill.

The scale of these two paintings makes them immediately striking. They were originally painted for the church of Santa Maria la Blanca in Seville and their scale reflects this. The narratives reflected in the paintings are in equal parts clear, and fascinating.

El Greco – Nobleman with his Hand on his Chest

El Greco is an eminent Greek artist, and this is considered to be one of his most important and celebrated works. What makes this portrait so worthy of interest is its expressive gaze and the attention to detail shown by the artist. What makes the piece particularly fascinating is that the identity of the model is unknown: some art historians suggest it could be a self-portrait of the artist himself.

Finally, these four landscapes, which can be found hung in a line in the museum, capture the effects of radiant sunlight in various scenes with trees, mountains, water as well as people and buildings. These paintings are particularly striking if you look at them all at once, as they portray the way in which light changes at different types of day is such as captivating and attention-grabbing way.