The Cost Of Living In Spain

Recent years have not been kind to the Spanish economy, but things are definitely improving. The cost of living had been rising, with salaries remaining low, and unemployment increasing – nearly a quarter of the workforce was unemployed in 2015. However, things are improving, and money is coming back to Spain via tourism, and large scale investments.

The quality of life in Spain remains very high. The size of the country means regions vary enormously, culturally, climatically, and economically. But the climate is excellent in the majority of the country, and general infrastructure is good, and continues to improve.

Many people retire in Spain because their pension buys them a better quality of life whilst living there; the climate also means you spend less on heating and electricity. The winter sun really makes life much more comfortable.

During the latter years of the Spanish property boom, housing in Spain became absurdly expensive both to purchase and rent. This has change radically and Spanish housing now offers good value for money. During the Spanish property boom of the late 90s and early 2000s, prices went absurdly high, both to rent and to buy. The crash has definitely evened things out again, and you can get amazing value for money these days both to rent and to buy.

Obviously prices are going to remain high in metropolitan areas such as Madrid, but go further inland, and away from the coast, and you can find amazing bargains.

The closer you are to the coast, and to Spain´s fine beaches, the more expensive property can become, and properties also hold their value much better. This is why it is often difficult to find quality beachfront property at a reasonable price.

Needless to say, the sky is the limit for high quality properties in prestigious locations. That said, there are also some exceptional bargains to be found.

Short-term summer rentals for any coastal property can be among some of the most expensive real estate in Spain, while long-term leases are usually cheaper.


Cost Of Public Transport In Spain

Public transport in Spain is generally cheap with coaches (buses) providing an excellent, low-cost way of travelling around the country. Meanwhile, the rail network also provides good value for money. Spain is also second only to China in the distance covered by its high-speed AVE network. Although more expensive than normal trains, the AVE does mean that travel between different parts of the country can be undertaken very quickly.

Public transport in Spain, offers fantastic value for money. Buses are incredibly cheap compared to other countries, and link many areas successfully. The Spanish rail system is also excellent value, and has received heavy investment in recent years. The AVE train, although a premium service, is incredibly fast, and offers a comfortable way of exploring this vast country.

Cost Of Education In Spain

Primary and secondary education is compulsory in Spain until the age of 16, when pupils can study at college and then university, or leave school altogether. Some students may also decide to take vocational training.

Most schools teach using the Spanish language, but it is important to remember, that there are several variations in the language in the areas of Catalonia and Valencia. This can make things difficult for students, as they effectively have to learn both Castilian, and the local variation (Catalan or Valenciano)

Private schooling, like in other countries, depends totally on the school you are intending to send your child to.

The cost of supermarket food is certainly not as cheap as it used to be, and doesn’t necessarily equate with the wage levels in Spain. I still believe it is much cheaper than countries such as the UK. Eating out is part and parcel of living in Spain, and the sheer quantity of restaurants, means that prices can be very competitive. You will also find alcohol prices that are extremely low compared to the UK. Spain is a major wine producer, and so you can find excellent wine at fantastic prices.

Clothing is surprisingly expensive in Spain, which is strange considering it has several large manufacturers. It might have something to do with the fact Spanish businesses rarely slash prices like they do in the UK – you will rarely see sales of the like you do in the UK. Of course, the internet now gives consumers an excellent option for buying anything at a reasonable price – offering amazing choice at the same time.

Cost of living in Spain chart

(Prices may vary across Spain, depending on product and service provider. The list below shows average prices for Madrid in June 2015.) 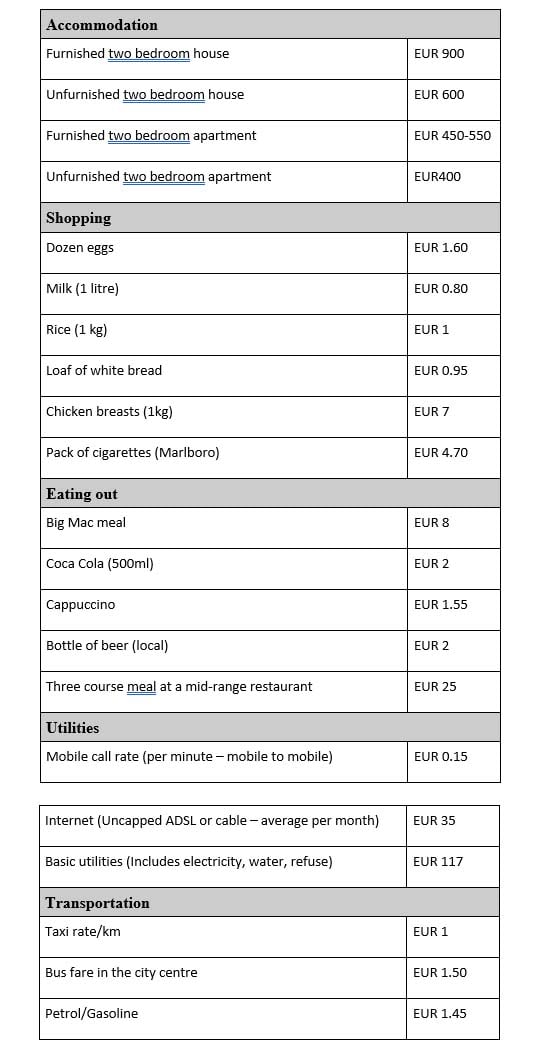 Here Comes the Sun: Official Advice for Coping with the Summer Heatwave