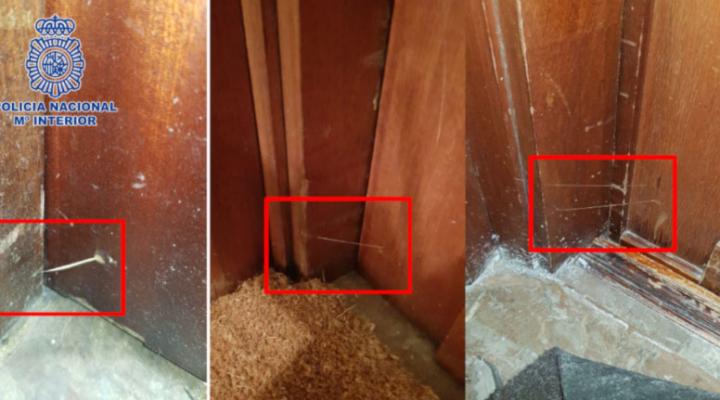 If you own a second home in Spain then you’re no doubt aware of the huge problem posed by squatters in the country, particularly if your home is vacant for significant periods of time. Now the Spanish police force has revealed on social media that they have discovered a new trick that is being widely used by both potential squatters and burglars to identify if a property is vacant or not.

Here’s everything you need to know about this new trick, which will be particularly useful information for second homeowners in Spain:

The new trick is surprisingly simple. The squatters or burglars simply stick a thin (almost invisible) string of glue between the door and the door frame, and they know that if it’s still in place when they come back several days later, the door hasn’t been opened and it is safe to assume that the property is unoccupied. Squatters and burglars have tried similar tricks in the past, the most recent being to insert a small piece of plastic into the gap between the door and the door frame; if the door is opened this plastic will drop to the floor, but if it isn’t it will still be in the same place.

This new glue trick is much more of a concern, because the plastic between the door frame was more easily visible, meaning that neighbours, authorities or any other representative for the home owners would be able to spot it. The same is not true of the very small and almost invisible strings of glue. So what can you do if you’re concerned that your property is being targeted by either squatters or burglars?  The police are encouraging all home owners to:

The Huge Problem with Squatters in Spain

The problem with squatters is something that every Spanish homeowner will be aware of, and will have no doubt have had conversations about before. In Spain squatters are known as ‘okupas’ and they are quite unfairly protected in Spanish law; this is particularly true in areas where there is a high level of political support for squatters and where there is a lack of affordable housing (especially if much of this housing is owned by second home owners). If your home is illegally occupied, therefore, you could find yourself tied into a lengthy and time-consuming legal battle.

The first 48 hours are the most important once squatters have taken possession of your home. In most countries, if someone is living in your home that shouldn’t be there, you would call the police who would remove them from your property. This is not the case in Spain! The police can only remove the squatters in the first 48 hours after they occupy your property. At this point, the squatters have an overwhelming number of legal rights. Once they have changed the locks to your home, or moved any of their personal possessions into your property, they will gain ‘squatters rights’ and you will have to go through the courts to remove these squatters from your home. This could take months, if not years.

Believe it or not, the news at this point only gets worse. Not only will you not be able to use your second home, because squatters are living in it, you will also have to continue paying all the utility bills. Cutting off essential services, such as water or electricity, would be seen as intimidation or coercion, and believe it or not you could be the one being charged by the police for this.

There are other routes that you could go down, and private organisations that you can approach to help you regain control of your property without lengthy court battles, but the main take home should be to prevent squatters getting in to your property in the first place. Up your home security, build relationships with your neighbours who could watch your property for you when you’re not there, and be vigilant for signs of tricks or tampering such as those outlined above.

Thinking of investing in your own Spanish home? Our property experts are perfectly placed to offer all of the help and support you need. Why not get in touch today?