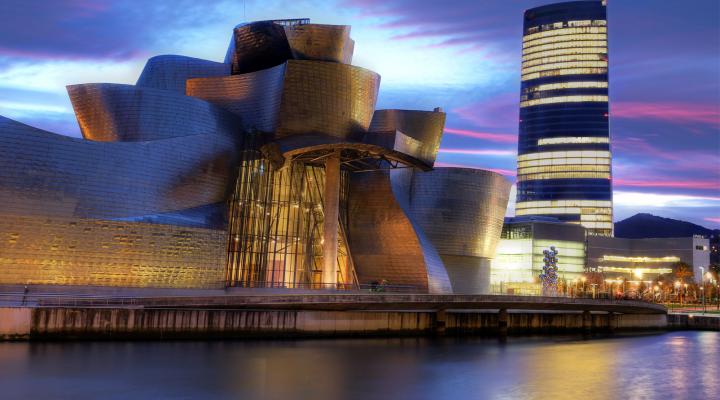 Spain is a beautiful country that is famed for its landscapes and its breathtaking natural beauty: from beaches to mountains, sea vistas to lush meadows. But Spain is also a country with an abundance of manmade beauty, and is home to a host of iconic buildings that have been designed by some of the world’s best architects. In fact, architecture fans travel from around the globe to see some of the beautiful and breathtaking architectural sights that Spain has to offer.

Whether you’re living in Spain, or just planning to visit the country for your next holiday, here are some of the must-visit architectural wonders that you should visit:

That the industrial city of Bilbao is now considered a red-hot tourist destination is, in no small part, due to the iconic Guggenheim Museum building. Designed by Canadian-American architect Frak Gehry, the building is created using scale-like layers of titanium and attracts visitors from all over the world. The buildings curves dominate the landscape, and in conjunction with the external sculptures and art pieces that are part of the museums exhibits, make the building feel like a work of art in itself.

One doesn’t often think of airports as being beautiful buildings, but terminal four at this airport has certainly broken that rule! Designed by British architect Richard Rogers and Partners, the roof of the building is reminiscent of a wave, and its repeated curves are so interesting and unique that the building won the 2006 Sterling prize for architecture.

Valencia’s City of Art and Sciences

The cultural impact of Valencia’s city of Art and Sciences has been considerable, but from a purely visual point of view, the impact it makes is immense. This huge cultural complex houses a science museum, IMAX cinema and an open-air aquarium, but the building itself is a gleaming white triangular megalith, made even more impactful by its reflection on the water that it looks over. This building was not constructed without controversy, however. Originally intended to be built with a budget of 300 million euros, it ended up costing more than three times this: local people saw the project not for its beauty, but as a symbol of national debt and expansive infrastructure spending.

Completed in 2011, the complex in Avilés, in Spain’s northern Asturias region is perhaps one of the region's most significant and memorable buildings. Not just one but five structures make up this complex, including an auditorium, dome and viewing tower. Brazilian architect Oscar Niemeyer experimented with shapes in his structure, and the results are truly breathtaking.

German architect J. Mayer H took a run-down square in the centre of Seville and turned it into something truly spectacular: the Plaza de la Encarnacion was opened in 2011 and features a huge waffle-like canopy. It maintains the record of being the largest wooden structure in the world, and is often referred to as Las Setas (The Mushrooms) by the residents of Seville.

In 2004, Iraqi-born British architect Zaha Hadid became the first woman to win the Pritzker Architecture Prize, and no design better demonstrates her architectural vision and skill like the Bridge Pavillion. This triangular pavillion was designed for the Zaragoza Expo in 2008, and now serves as a pedestrian bridge, meaning it is possible to walk through it and marvel at its modern yet minimalist design.

Constructed from huge, overpowering ribbons of gold and pink titanium, architect Frank Gehry designed this breathtaking hotel to incorporate both cubes and free-flowing shapes, which compliment each other perfectly. The colourful ribbons replicate the vineyard that the hotel is located on: the winery of Vinos Herederos del Marques de Riscal is one of the oldest wineries in Spain’s La Rioja region. When they catch the sun, you can see this structure from miles away.

Rising from the ground like a giant crashing wave, the Concert Hall in Tenerife is located between the Marine Park and the edge of the port in Santa Cruz de Tenerife, meaning that it perfectly reflects the environment where it is based. Despite being constructed entirely from concert, the building doesn’t have the harsh edge that you might expect, thanks to its unique shape and soft curves.

The Torre Agbar in Barcelona is a 38-story skyscraper that is considered one of the most significant and eye catching modern architectural landmarks in the city. First opened in 2005, the building itself is the headquarters of Barcelona’s water company, but it is the clever use of light, reflected from its multi-coloured façade, that attract the attention of all who see it.