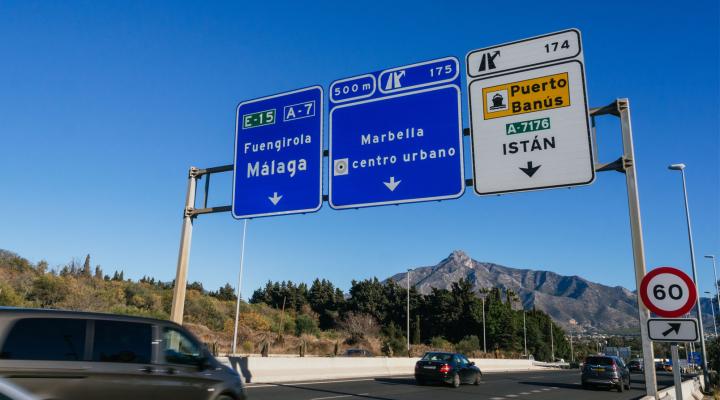 The A-7 is an expansive road that stretches along Spain’s Mediterranean coast, travelling from Algeciras to  Altafulla. Widely considered to be one of the most unusual roads in Spain, this is no boring motorway: rather than an expanse of smooth grey road, if you choose to travel along the A-7 then you will be able to explore castles, beaches and mountains on your journey. For this reason, travelling along the A-7 is one of the most popular road trip roads in Spain.

If you’re thinking of embarking on a Spanish road trip as a fun and unusual alternative to a week spent laying on a beach in the sun, then here’s everything you need to know about road tripping along the A-7 in Spain:

Start in Algeciras and Travel to Marbella

Because the A-7 is a new road, the ends are considered both the most interesting and the most complicated segments. This is because, technically, the road is not complete, and you may have to use the AP-7 road to complete your journey. Start your journey in Algeciras and travel to Marbella. This section of your journey will offer beautiful landscapes and sea vistas. You can also enjoy a warm and sunny climate, with the Costa del Sol receiving 350 days of sunshine a year. Stop in Estepona for a bite to each (this town is particularly well known for its delicious sea food) and then follow the road on as you pass the breathtaking Strait of Gibraltar.

As you’re travelling along this particular section of the A-7, you may notice a series of watch towers. These were built to protect the coastline from Berber pirates, who attacked along the Mediterranean coast, and devastating fishing populations. King Philip II built circular towers in response. The role of these towerrs was to warn local residents if pirates were in sight. Many of these towers were later reinforced, which is why you may also see small fortifications around some of these towers. In the case of Almeria, a larger structure was created.

Stopover and Spend a Day on the Beach

Andalusia is famous for its vast expanse of beautiful beaches, so why not make an overnight stop in this region and combine your downtime with an opportunity to spend time on the shore?  You could even stop more than once because between Marbella and Almeria, the A-7 runs exclusively along the coast. Marbella, Fuengirola, Mijas and Benalmadena are all highly respected coastal towns with beautiful beaches and robust tourism industries that can be accessed without leaving the A-7.

If you don’t have the time or the inclination to stop on the Costa del Sol then when you reach Granada you could choose to stop at the beach on its Costa Tropical instead. There are several beaches on offer here, with the Sierra Nevada mountains providing a unique and interesting backdrop.

Admire Castles and Fortresses on Your Route

As we have already discussed, there are many fortifications along the A-7 in response to the threat of the Berber pirates. But because these fortifications were introduced, its important to note that the Spanish coast was already fortified. As a result, you will see castles and fortresses regular as you journey along the A-7. Some of the most noteworthy of these include: the Alcazaba of Almeria in Andalucia in Cordoba, Colomares castle in Benalmadena, the Castles of Monteagudo, the Castle of Lorca, and the Templar castle of Miravet. Be sure to allow time to explore at least one of these fascinating historical fortresses in depth as part of your journey.

From the Coast to the Mountains

Once you have passed through Murcia you will reach the Valencian interior, and the landscape changes dramatically here. An essentially inland road awaits at the capital, which then runs between imposing mountain ranges for a considerable period. The contrast between coast and mountain range is a core component of the appeal of the A-7.

Cities Not to Be Missed

Another considerable appeal of the A-7 is that it passes through some of the most important cities in Spain. Many of them were imposing medieval ports and others have been built as agricultural emporiums. Their culture and monuments make them prime stops for your journey. Some of the cities that you simply shouldn’t miss exploring, if time constraints allow, include:

Nature is perhaps the greatest attraction of the A-7.  You will find yourself in awe of the natural views you experience, and you’re likely to spend more time out of your car taking photos than you are driving. Natural parks loaded with wildlife are abundant on this route. The inland part of the Alcornocales Natural Park is accessible from the A-7, for example. In Cabo de Gata-Nijar you can explore the forests of Posidonia oceanica, an algae that houses an ecosystem of great biological value. And although the deserts you pass through may seem dead and arid, they are actually teaming with life. These regions support endemic species and migratory birds. Tabernas is is the only pure desert area in Europe, and you will find all of the flora and fauna you would expect in this barren and yet magical environment.