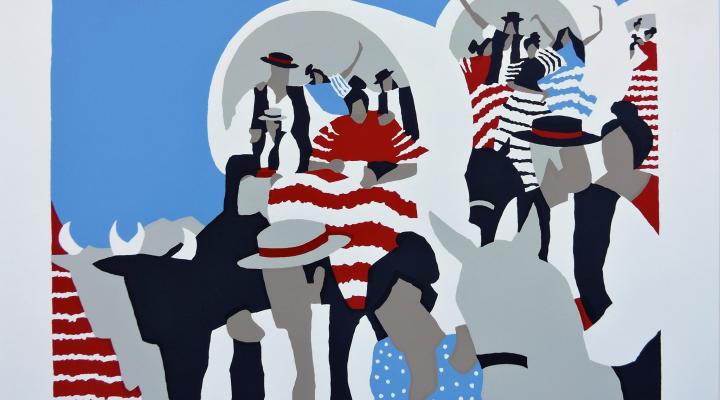 In this new series we will shine a spotlight on Britons that have moved to Spain and made a real impact in the country. From using the traditional Spanish lifestyle as inspiration for their work to embracing the region’s rich cultural heritage, these are British Spanish residents that represent the very best of Britons in Spain.

The series will begin with artist Chandy Haggett, whose Spanish-inspired work can be found across Andalusia and beyond.

Chandy Haggett moved to Andalusia more than 30 years ago, and it’s clear to see her passion and genuine love for the region that she now calls home. This is reflected in both the style and subject of her art work. Chandy's style is truly unique, and she manages to captivate her audience with her works, which I would describe as a visual love-letter to Southern Spain.

Chandy’s focus medium is hand silk screen prints that use minimalist blocks of colour which still manage to reflect a wealth of personality and atmosphere. The most popular and memorable of Chandy’s pieces depict beautiful Andalusian landscapes, the intricacies of Spanish rural life, and the vibrancy of the region’s ferias and fiestas. All of traditional Spanish life is here, which is why her works are so popular with both local residents and tourists alike.

Chandy’s relationship with Spain began more than 30 years ago, when she arrived in the country to visit her parents, who owned a small farm near Manilva. When her parents left Spain to move to France, Chandy remained in the country although she felt rudderless and lonely during this period. It was her art that saved her, giving her an income and something to focus on: Chandy began hitching rides to the the secondhand market in Puerto Banús every Saturday morning, selling her paintings to holidaymakers.

At first her works were dark and gloomy, but recognising that this wasn’t what tourists wanted to see or buy whilst they were holidaying in the sun, Chandy changed her style and began to create the unique screen prints that we know and love today. Andalusia entered her heart and her soul, and this passion for the place she calls home is reflected in every piece she produces, and every piece she has produced for the last thirty years.

Confirming this love, Chandy once said in an interview “Immediately falling in love with Spain and its people, I saw things very much in blocks of colour: blue skies, yellow fields, white houses and the gossiping old women dressed in black.” It is these blocks of colour, and the way these one dimensional blocks can be enthused with such personality, that makes Chandy’s works both so unique and so popular. They are the perfect souvenir of a trip to Southern Spain, because they make you feel like you are taking a little piece of the country home with you.

In her most recent collaboration as part of the Alhaurín El Grande council’s latest cultural project, which was supported by the El Artsenal art project in Malaga, Chandy has created a huge, large-scale 11 metre mural. This mural can be seen on a wall in Calle de la Cruz and it depicts an everyday scene in a typical Andalusian village. The placement of the piece has clearly been considered when its subject was chosen, as it evokes the sensation that you are part of the scene, and that this traditional Spanish lifestyle is taking place around you as you’re simply walking from A to B. The full mural took just one week to create and Chandy will soon begin work on a second, complimentary mural on an adjoining street. This means that Alhaurín El Grande is a great place to visit if you’d like to see Chandy’s work in the flesh, and in its largest scale. The location also adds an extra dimension of interest to the work, bringing further depth of understanding.

Of the mural, Carmen Peña, who is the coordinator of El Artsenal, said that "Chandy's spectacular work offers the true essence of Andalucía."

Whilst Chandy’s work may invoke memories of villages visited or fiestas enjoyed, in reality her pieces don’t reflect a specific place but rather a general mood or atmosphere. This is because Chandy works almost entirely from imagination, never using photography or real life for reference.

It isn’t just the people of Andalusia, and the tourists that are captivated by the region, that are fans of Chandy Haggett’s bold and colourful work. Chandy has held several exhibitions of her work on the Costa del Sol, as well as in Gibraltar and France.

She has also been commissioned to create several works for local clubs and peñas: when you are travelling around Southern Spain it is likely that you will see examples of her work on display. And you will certainly see the landscapes and tranquil scenes of everyday life that so often inspire her works: perhaps they will seep into your heart and soul as they so clearly have entered the artists.

Sharing Her Skills with Others

As well as creating her own stunning silk screen printed pieces, Chandy also shares these skills with others, enabling them to use her medium to bring their own visions to life.

Chandy offers workshops  (when covid-restrictions allow) which enable small groups of people to gather and not only watch how Chandy herself works but also learn the silk screen printing skills that you need to create your own pieces, with a little time and patience. These are day long work shops and they are great fun for the creative and crafty, and for aspiring artists alike. Whether you are visiting Southern Spain and want to learn a new skill as part of your trip, or live locally and are interested in the art of screen printing, Chandy’s workshops are truly unique and well worth experiencing for yourself.

You can find out more about Chandy Haggett via her website.

You can also see further examples of her incredible and moving art works in her online gallery.

Are you in the process of moving to Spain or looking to make the right move to Spain for you? If you’re looking for estate agents in Southern Spain then why not get in touch? Our locally based property experts are a font of local knowledge, and are perfectly placed to help you find the home of your dreams.