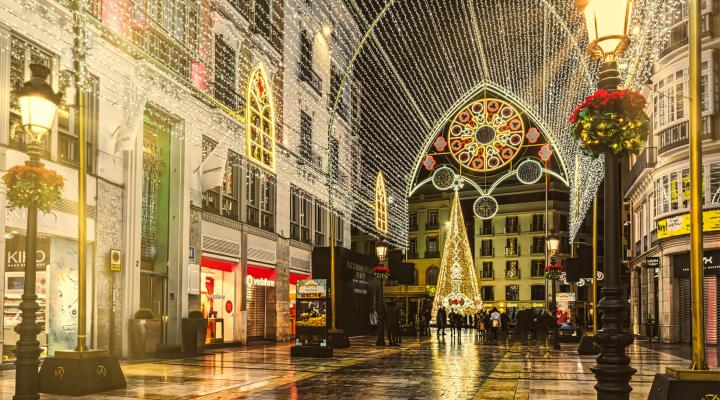 Christmas feels bigger and better in Spain when compared to many other European countries, and this is certainly true of the spectacular Christmas light displays that many Spanish cities share to surprise and delight their residents and visitors alike. You’ll find thousands of twinkling lights in white, as well as an array of other colours, and moving displays that attract young and old from all over the country.

It may feel in poor taste to talk about Christmas lights when Spain, and much of Europe, are in the grips of an energy crisis. However many Spanish cities have counteracted this concern by shortening the hours that they will turn on their Christmas lights this year, and some have also switched their traditional bulbs for LED bulbs to minimise the environmental impact. The exception to this are Madrid and Vigo, who will both literally and figuratively brighten up December for their residents as they always have.

Here are the Spanish cities with the best Christmas light displays this year:

Widely considered to offer one of the best Christmas light displays in Spain, Malaga has not only excellent lights but also a wonderful festive atmosphere. The lights in Malaga combine colour and movement to spectacular effect. Of particular note is the Calle Larios, which is the busiest shopping street in the city, which boasts a light and music show that attracts hundreds of thousands of visitors every year. In total, a whopping 500 streets in Malaga are included in the city’s lights display, and the city’s cathedral is also included in the event with a large-scale video mapping projection covering its exterior.

Another city that boasts a huge number of Christmas light displays is Madrid. As Spain’s capital city, Madrid doesn’t disappoint with its commitment to Christmas, making use of an incredible 7 million LED lights to complete its installation. No matter where you visit in Madrid, you will find Christmas lights: the displays not only cover the city’s most famous streets but also its most famous buildings. With so many options to choose from, viewing the Christmas lights in Madrid can be overwhelming. But the best light displays in the city can be found between Gran Via and Calle Alcala, where 40,000 12-meter Christmas lights are hung. You should also visit the Christmas market on the Plaza Major, which combines its light display with all of the fun of a traditional Christmas market. Finally, the Naturaleza Encendida show in the Royal Botanical Gardens is one of the most unique and beautiful Christmas displays, and one you can only see in Madrid, making it a display not to miss.

The Canary islands are famed for their year-round sunshine, but that doesn’t mean that palm trees can’t sit alongside Christmas trees! Santa Cruz de Tenerife is the largest city in Tenerife, and it really knows how to put on a show a Christmas. You’ll find 140 streets lit up with an abundance of lights: in fact, 3 million LED lights are used in the city’s Christmas displays this year. Those 3 million lights are included within 176 arches and 26,334 metres of garlands. It’s an incredibly popular destination for Christmas lovers hoping to spend the season in the sun!

One of the most popular destinations for tourists taking winter city breaks, the Catalan capital of Barcelona uses its lights to attract visitors from all over the world. Every neighbourhood in Barcelona boasts its own unique Christmas displays, but of particular note are the metallic butterfly lights in the elegant Passeig de Gracia and the candle displays in Gaudi’s Casa Batllo. The biggest and most famous display though is along La Rambla, where you will find stunning lights at every turn.

You might not thing of Vigo as being a major Spanish city, but when it comes to Christmas light displays, this small city really packs a punch. This year the city will be bedazzled by 11 million LED lights and the city mayor, Abel Caballero, allocates a significant budget to decorating for his favourite season. Understated is not a phase used when discussing the Vigo Christmas lights! For the best view of the lights, head to Porta do Sol. Here you will find the city’s premier Christmas as well as a 10 metre tall Christmas bauble, and you will find great views of the city lit up and twinkling.

Widely regarded as the Spanish centre of art and culture, the industrial city of Bilbao takes an artistic and impressive approach to its Christmas light displays. The city streets are illuminated by around 500,000 LED lights ranging from around 8 metres to 18 metres high. Unique to Bilbao, you will also find the Basque version of Santa Claus prominently included in these displays, making it a great place to visit if you’re travelling to Spain with children this festive period.

Perhaps the best way to understand the spectacle of Zaragoza at Christmas is to look at the city’s light display in numbers: 700,000 euros is invested, more than 100,000 LED light create a ceiling of sparkles on a single street, and the centre piece of the display is a 22 metre tall Christmas tree. If you’re spending Christmas in Zaragoza then be sure to take a stroll down Alfonso I, which is by far the best and most elabourately decorated street in the city.