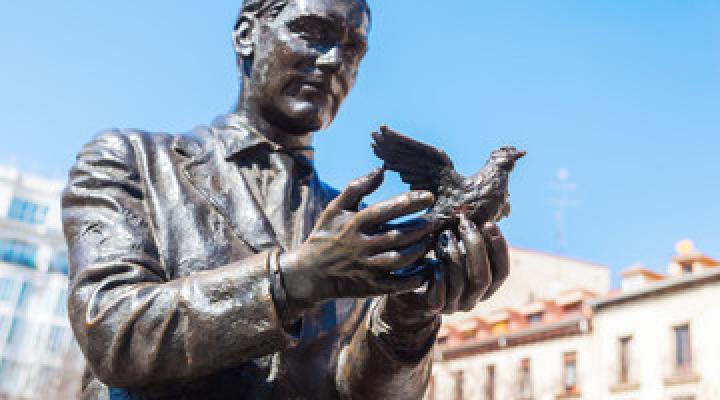 Andalucia attracts hundreds of thousands of tourists, adventurers, and second homeowners every year. Famed for its stunning landscapes, and its warm and friendly people, Andalucia offers so much more than simply a great place to enjoy a week away: that’s why it has attracted writers and poets for generations. Where better to be inspired, take time out to focus on crafting your art, or simply enjoy the sun whilst you wait for inspiration to strike?

With that in mind, here is a brief journey through Andalucia’s rich literary history, and the writers that have either lived in the region or been inspired by it:

The Authors of Andalucia

Federico Garcia Lorca is known as the Spanish writer with the biggest reputation outside of Spain. His romantic poetry has been translated into more languages even than Cervantes’ Don Quixote. But what you may not know is that much of the romantic poetry he created was inspired by the traditional flamenco and bull fighting of Andalucia, where he called home. Lorca captured the imagination because he was so much more than a poet: he was also a novelist and talented musician. Sadly, his life was cut short whilst he was still in his literary prime: he was murdered at the start of the Spanish Civil War in 1936, somewhere near Granada, although the exact location of both his demise and his grave have never been found. You’ll find a statue of Federico Garcia Lorca in Madrid, and can also visit the Federico Garcia Lorca Park in Granada too.

Born in Seville, Vicente Aleixandre was the 1977 winner of the Nobel Prize for Literature. Some of the works that he produced are considered to be the most important works of Spanish literature that have ever been written, which is quite an accolade. The writer often focused on man’s relationship with the cosmos, a theme that recurred throughout his work. Aleixandre was no stranger to contraversy as, like so many prominent cultural figures, he was opposed to the the Franco dictatorship that followed Spain’s 1936–39 Civil War. As a result, his work was banned throughout the country between 1936 and 1944.

Perhaps the most famous modern Andalucian author, Salvador Compán was born in the beautiful town of Ubeda in Jaen and now lives in Seville. He is incredibly influenced by his surroundings, and both locations have featured in his works. His most recent novel was released in 2017 and is both set in Jaen, and explores the lives of those who live there. The novel, which is titled  El Hoy Es Malo, Pero El Mañana Es Mio (Today Is Bad But Tomorrow Is Mine), is an exceptional read and offers a wonderful insight into provincial Spanish life.

They say the greatest artists are never appreciated during their lifetime, and that is certainly true of Seville-based poet Gustavo Bécquer. During his life his poetry was barely recognised, leading him to search work as a journalist to help make ends work. Now though, he is one of the most widely read Spanish authors, second only to Cervantes. Becquer began writing poetry as a teenager, but the work that he is most famous for is his  Rimas y Leyendas (Rhymes and Legends), which were never formally written down by the author. Instead, his friends memorised the verses and they were published in written form after his death from tuberculosis at the tender age of 34. Nowadays, 150 years after his death, he is highly regarded and ‘Rhyme number 21’ from the book has become one of the most well-known poems in the Spanish language.

Known as Gypsy Ballads in English, this was the first of Federico Garcia Lorca’s books that really exploded on the international literary scene, and it is one set in Andalucia. Gyspy Ballads explores Romani culture in Andalucia and uses motifs such as the moon, the sky, night, death and rivers to explore the poetic essence of the region. The author’s passion for Andalucia is apparent in every verse, and his use of powerful imagery continue to make the verses as readable and relevant as they were when they were first written.

English prose enthusiasts will immediately recognise the verses of Laurie Lee, whose passion for all things Spanish has inspired a generation. Lee both lived and travelled extensively in Andalucia with his wife, and the novel was written as a love story to Andalucia and the towns there that he loved. Lee had to return to England when the Spanish civil war began, but that didn’t stop him from continuing to write about Spain throughout his career.

Théophile Gautier was one of France’s most celebrated writers, and he was send by French publication La Presse to create a travelogue about Spain. The resulting book is as famous now as it ever was, and provides a wonderful insight into life in Southern Spain. Gautier fell in love with Andalucia, in particular with Seville, the wild gypsy women he met, and the incredible landscapes. This enthusiasm oozes from every page of the book.

Are you thinking of moving to Spain and buying a property in Andalucia? Then why not let us help you with your property search. Our locally based property experts are perfectly placed to find the right Spanish home for you. Get in touch today!