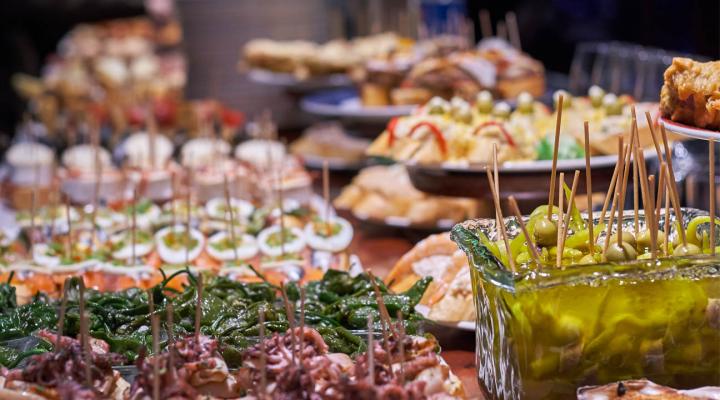 Spain is famed for its delicious tapas, but what many people don’t know is that in the Basque Country, these small plate dishes are known as pintxos. This traditional Basque country dish comprises of a small piece of bread that is then topped with a host of delicious and creative ingredients, and then held together with a long toothpick or skewer. Rustic and delicious, pintxos are typically served in bars alongside a cold beer or glass of wine. So how is pintxos different from tapas? How do you order pintxos when you’re in the Basque Country? Here’s everything you need to know:

One of the first questions that most people will have about pintxos is what, exactly, are they. Spelled pincho is Castillian Spanish, there are small dishes similar to tapas, but unlike tapas they take a specific format. Whilst tapas dishes are served on a plate, pintxos are traditionally served on a piece of bread or through a skewer.

The beauty of the pintxo is that because it is so simple, it can be topped with almost anything, meaning that what started as a simple snack has become a culinary masterpiece. Some pintxos are very basic and are a piece of bread topped with a single ingredient, such as a roasted pepper or a small piece of Spanish tortilla. Some pintxos are more elaborate and take the form of a mini meal with complex, locally sourced ingredients.

Whilst traditional pintxos are served on a piece of bread or through a skewer, they can also be more tapas-like in their presentation, meaning that you may find they are presented on small plates, in small glass bowls or jars, or even in little frying pans.

Where Will You Find Pintxos?

Pintxos dishes are available all over the Basque Country region, regardless of how big or small a town or city is. But the Basque Country’s pintxo capitals, those that attract foodies and gourmets from around the world, are in San Sebastian, Bilbao and Vitoria-Gasteiz. Not only are these the three most important cities in the region, they also have a long-held tradition of serving delicious pintxo to their guests. Each bar will have its own speciality pintxo dish, but many of these are repeated in bars across the region. Some of the most popular pintxo dishes that you should look out for include:

Are Pintxos Suitable for Vegetarians?

Whilst it’s likely that there may be one of two vegetarian options, you shouldn’t expect to find vegetarian pintxos in abundance. In the same way as with many tapas options, vegetarians simply aren’t catered for in Spain. However, if you don’t see any vegetarian options, most bars will be able to make you something simple and will be happy to do so. Many of the vegetarian pintxos that are available will include Idiazabal cheese, which is a Basque speciality, meaning you will still get a taste of the traditional ingredients from this unique part of the world.

When choosing your pintxos, you will find them laid out on top of the bar so you can look at the dishes available and see which you like the look of: often these will be labelled (which is convenient if you’re vegetarian) but you may have to ask for a list of ingredients in some bars.

How Do You Order Pintxos?

Eating pintxos is not a fine dining experience, so you shouldn’t expect mood lighting and table service. Most bars in the Basque Country won’t offer table service, meaning you’ll have to head to the bar to place your order. Be prepared to push yourself forward, as there isn’t a traditional queuing system in place in Basque bars.

Once you get to the bar, order your drink first before you order your dishes. Traditionally, you should order a glass of red Rioja wine, local Basque white wine, or a beer with your pintxos. If you don’t like the look of any of the cold pintxos on the bar then ask for the list of hot pintxos dishes available. These tend to be more expensive, but they are freshly made to order, and are usually slightly bigger than the cold dishes too.

Pintxos are never given free with your drink like tapas dishes often are in wider Spain. You should expect to pay between 2 euros and 3.5 euros for each cold dish and a little more for a hot dish. You will order and pay for your pintxos as you order your drinks and these will be added to your bar tab so that you can pay for your bill in full as you leave.

Pintxos bars close a little earlier than other bars in Spain, so expect to finish your dishes and be ready to leave by around 10.30 pm on weekdays and slightly longer on weekends.

Are you thinking of moving to Spain? Perhaps you like the idea of submerging yourself into the traditional Spanish lifestyle and cooking Spanish recipes every day? Or just relaxing in your local pintxos bar? Whatever your dream, we can help. Why not get in touch with our team of local property experts today, to find out more about how we can help you.