Everything You Need to Know About Eating Well in Spain 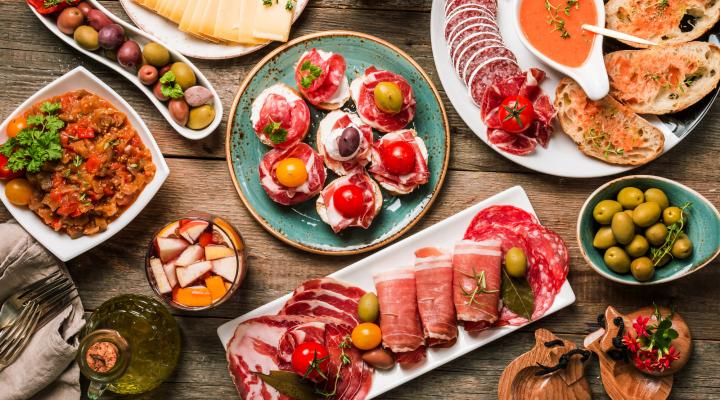 Spanish food is world-renowned for its hearty flavours and rich, yet rarely complex, ingredient palette. Eating in Spain, whether sitting down in a restaurant or grabbing a snack from a street food vendor, is almost universally a wonderful experience. It’s no coincidence that three of the world’s ‘Top Ten’ best restaurants are based in Spain, and modern chefs such as Juan Mari Arzak, Ferran Adrià, Pedro Subijana, and Martín Berasategui are making Spanish cuisine cool again.

What makes Spanish food special is that it is so much more than just food on a plate: mealtimes in Spain are an integral part of the day, a chance to gather with friends and family. Eating well in Spain is living well in Spain. With that in mind, here’s everything you need to know about Spanish cuisine:

A Brief History of Spanish Cuisine

Its position between Europe and Africa means that Spain has long served as a cross roads for different civilizations. Ancient Greeks and Romans, Moors, and Jews have all made the country home, and this melting pot of people has heavily influenced Spanish cuisine. Whilst we generally think of olives as being Spanish, for example, they were actually introduced to the region by the Phoenicians. Each of the 17 autonomous regions in Spain also have their own, distinctive dishes (well worth exploration when you’re in each region) and Spanish food has also been influenced by other nearby European and Mediterranean countries, notably France and Italy.

As Spain borders the Mediterranean Sea, it should come as no surprise that the highly regarded Mediterraean diet is popular in Spain: this involves eating a balanced diet of locally grown produce, fresh fish, and minimal amounts of processed foods. The key to embracing the Spanish Mediterranean diet is to eat local, seasonal produce where possible, and add healthy fat with olive oil. Avoid refined sugars and excessive red meat if you want to eat like a Spaniard.

One of the main reasons the Mediterranean diet is popular around the world is because of its proven health benefits. It is no coincidence that, at 82.6 years, Spain has the longest average life expectancy in the world. Bloomberg has also ranked Spain as the healthiest nation in the world.

In Spain, you will rarely see someone eating a meal on the run. Spending time together, sat around the table, to eat is an integral part of Spanish culture; for this reason, family mealtimes are often fixed and the schedule for meals is very rarely disrupted. The Spanish word ‘sobremesa’ translates to mean ‘around the table’ and was specifically coined to represent the importance of this mealtime gathering. Like most European countries, Spaniards eat three main meals a day; Breakfast, lunch and dinner, with lunch being the most important. Snacks are also incorporated into this daily dining plan. Here is a brief breakdown of what you can expect to eat and when:

Because food, particularly sharing food, is such an integral part of life in Spain it should come as no surprise that food is also used to bring families and friends together on Special occasions. Here are some of the special meals that you will enjoy during your time in Spain, a way of showing love with food:

There is no specific ‘Spanish Christmas dish’ as there is in other countries (such as the roast turkey in the UK) but food is integral to the Christmas celebration. Popular Christmas foods include roast suckling pig or roast lamb, and seasonal desserts abound: these are often made with nuts, sugar, and honey; creating a rich and distinctive Mediterranean flavour. The Spanish sparkling wine Cava is also a popular drink to make a toast with on Christmas day.

Spain is a country with a largely Catholic population, so Epiphany is a big day for celebration in Spain. On Three Kings Day, almost everyone in Spain will eat a Roscon de Reyes: an oval shaped cake filled with hidden surprises.

On the theme of religious celebrations, cake is also popular at Easter, where Spaniards indulge their sweet tooths. The most popular traditional Easter cake is probably Mona de Pascua. This cake is usually topped with eggs and has a fun festive feel; traditionally, godparents offer this cake to their godchildren, so you will find them in every bakery around Easter time.

If you’re looking to stock your pantry with a host of quintessential Spanish ingredients then the following will be perfectly placed in your kitchen:

If you want to live like a Spaniard then you need to eat like a Spaniard. That’s not difficult in Spain, where traditional Spanish dishes can be found in every restaurant on every corner. But it’s also not hard to create high-quality Spanish recipes at home. Here are some of our favourite Spanish recipes for you to try to replicate yourself:

Finally, it’s important to note that the Spanish food you know and love might taste very different depending on where in Spain you are based. There is an old Spanish proverb about the diverse cooking methods throughout the country. “In the north, you stew, in the center, you roast, and in the south, you fry”. Whilst this is a very simple way to summarise the nuances of regional cooking, at its heart this proverb is true.

In Andalusia, sea food is incredibly popular due to the region’s proximity to the coast and its rich fishing heritage. Sole, sea bass, baby hake, sea bream, red mullet, sardine, prawns, anchovies, baby squid, cuttlefish, murex, wedge sole, wedge shell clams, and white shrimp can all be caught (and eaten) in the region. Cured meats, roast meat dishes, and cold soups (such as the gazpacho mentioned above) are also all popular in Andalusia. If you’ve got a sweet tooth then you’re in luck; Andalusian cuisine has been heavily influenced by Moorish culture, so desserts and pastries filled will nut pastes, sugar and honey are all also popular in the region.

Are you thinking of living in Spain? Perhaps you like the idea of submerging yourself into the traditional Spanish lifestyle and cooking Spanish recipes every day? Whatever your dream, we can help. Why not get in touch with our team of local property experts today, to find out more about how we can help you.