A Hiker's Guide to the Caminito Del Rey in Malaga 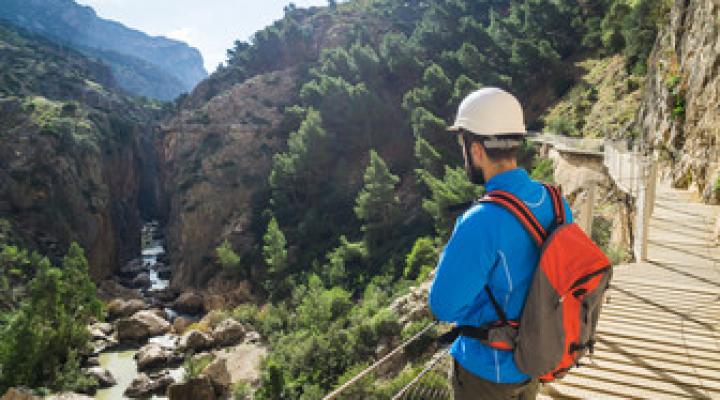 Imagine walking 3 kilometres across a boardwalk that hovers 90 metres above a gorge...

Seems mad as a box of frogs, doesn't it?

You may be the adventurous type who's always up for an adventure at the drop of a hat. So, the idea of walking that high up may not seem completely off your head bonkers.

Sound like you? If so, look no further than Caminito del Rey!

Spain is already attracting more expats every year. If you're planning to house hunt in Malaga, Spain, there's so much to see and experience while you're here.

Put El Caminito on your to-do list. But before you do, here's everything you need to know about this hike of a lifetime!

Industrialisation came to the mountainous Andalusian region by the early 20th century. Hydroelectric power was especially prominent around Malaga.

In 1901, construction of Caminito del Rey began. The walkway extended across the gorge between Gaitenejo and Chorro Falls.

It originally allowed workers at the presiding hydroelectric plants to cross the gorge. But further into the 20th century, it became a hot spot for daredevils and rock climbers.

But what was once known as "the world's most dangerous pathway" is no more. By the 2000's, the Andalusian government decided to renovate the rickety pathway. And in 2015, a much safer boardwalk opened to the public.

The drive to Rey Park takes about an hour from Malaga's city centre. The entire length is nearly 8 kilometres long. The remodelled boardwalk that the public has access to stretches about 3 kilometres.

The route begins in Ardales and ends in Alora. You'll need to park your car and do quite a bit of hiking before the start of the pathway itself. A park ranger will check your tickets upon entering.

The majority of the boardwalk is wood. However, there are sections made of glass-floored lookouts. These make for an even more exhilarating view of the dramatic drops and river below.

The new boardwalk is entirely bordered by railings, wire, and netting. Should you feel a bit uneasy by the dizzying heights, you'll always have something to grasp.

At the same time, you'll get to see remnants of the old pathway that people once had to cross. It not only makes for a thrilling adventure but a historical one, as well.

It's advised that hikers wear climbing helmets at all times. Falling rocks and debris are rare occurrences but can still happen.

Costa del Sol is not only rich in gorgeous Mediterranean beaches. Further inland you'll find some of the world's most majestic treasures. And nothing exemplifies this better than Caminito del Rey.

If you're ready for the hike of a lifetime, El Caminito awaits. Even if you're afraid of heights, never fear! The walkway is nothing like it used to be 100 years ago. So, get your hiking boots ready, as well as your climbing helmet and sunscreen.

And if you must pass on the opportunity, there's plenty more to see and experience in Costa del Sol. Let us help you find more ideas on what to do and see while you're here!