4 Facts to Know About the Nerja Caves in Spain 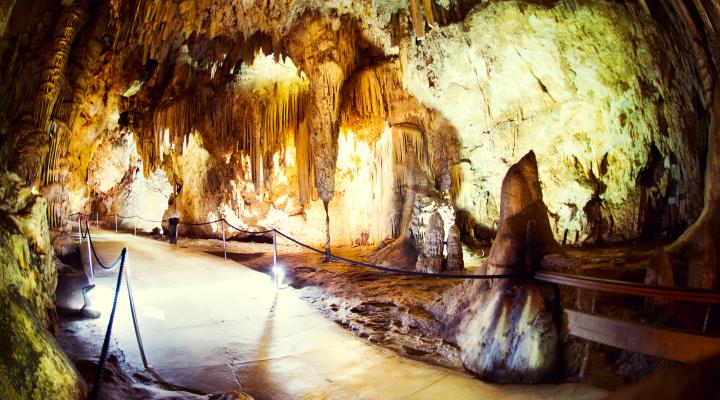 One of the biggest tourist hotspots in Spain, Andalucia's Costa del Sol attracts more than 35% of the 30 million tourists that visit the region every year.

Many visitors wanting to explore caves in Spain come to Costa del Sol to trek through the stunning Nerja Caves, known as Cuevas de Nerja in Spanish.

Learn more about the Caves of Nerja below so know what to expect and how best to prepare for your visit.


The Nerja Caves: 4 Things to Know Before You Visit

Stretching almost five kilometers across the southern province of Malaga, the Caves Nerja house the world's largest stalagmite. Here are four more things to know for your visit:

History of the Nerja Caves

On January 12, 1959, a group of five local boys from the nearby village of Maro decided to go hunting for bats. They went to a sinkhole known as "La Mina" and found an opening blocked by stalactites.

They returned the next day and broke through the stalactites. Inside they found it continued to open up into a massive cavern and discovered several skeletons next to bits of ceramic pottery.

The boys shared their discovery and, eventually, a medical expert and a photographer returned to investigate the cave. They declared it a rare archeological find and in June 1960 the Spanish government opened the Cueva de Nerja to the public.

Researchers conducting further investigations discovered even more chambers in the caves. In 1960 and 1969 respectively, they found an upper gallery and other new galleries. These sections remain closed to the general public.

These new galleries contain prehistoric remains of great significance. The most important discovery is a painting of seals that scientists date back to 42,000 years ago. They believe Neanderthals may have drawn the paintings.

How to Get to the Cuevas de Nerja

The Caves of Nerja lay on the outskirts of the Sierras de Tejeda, Almijara, and Alhama Natural Park. Getting there does not take much effort since you can drive straight to the caves. They even offer plenty of space to park.

If you do not have access to a car, buses run at regular intervals from Nerja. It takes about 10-15 minutes and should cost less than 1 euro.

You may also walk to the Cuevas de Nerja from the Balcon de Europa. On May 15 every year, thousands of people walk the 5.2 kilometers during the San Isidro procession.

What to Wear When Exploring the Caves of Nerja

Check the local weather in Costa del Sol before you go and remember to bring the appropriate attire for exploring the caves.

They do not allow visitors with flip-flops to enter even with the designated walkway. It can be slippery, so choose your footwear accordingly.

It can be cool in the caves as well, but not uncomfortable. Just carry a light jacket if you think you may get chilled.

Things to Do at Cueva de Nerja

When visiting the Nerja Caves, be sure to set aside at least 1-3 hours to get the full experience.

See the Largest Stalagmite in the World

See thousands of magnificent stalactites and stalagmites while you explore the caves. You can even see the largest stalagmite in the world standing 32 meters high with a base of 13 meters by 7 meters.

Go to a Concert in Cuevas de Nerja

One of the galleries inside the tourist area forms a natural amphitheater. You can attend one of the many concerts put on here, including the Festival de Musica y Danza that has occurred every year since 1960.

Rent A House Near the Nerja Caves

Considering renting a holiday home for your next trip so you have a comfortable base that feels like home.